With High Winds with Gusts of up to 60mph this property at Mill Hill in Blackburn suffered some major issues. The 4 year old (so relatively new) extension  saw a number of ridge and hip tiles ripped off   also a large number of the roofing slate  suffering the same fate the home owner called in RidgeSmart to undertake an inspection . In our findings we also had to report that not only had the tiles been lifted but in the process the vast majority had also severely damaged the roofing felt that had the potential to cause patch wetness throughout the whole extensions upper room ceilings.

Ridgesmart prepared a fully written report for the home owner and their insurers. This also included evidence of the weather at the time the damage occurred, other issues caused by the weather in the Blackburn area, as well as the extent of the damage to this property. and photographic evidence (a section of which can be seen Below)

The Home owner after seeing the damage first hand and in the report, made the decision to fully remove the roof and re instate. Given the large number of punctures to the felt having lost so many slate and over 18 broken­/cracked ridge tiles they strongly felt a full re-roof would allow greater security the whole roof would onece again water proof rather than patch repairs being undertaken given the extent of the damage. 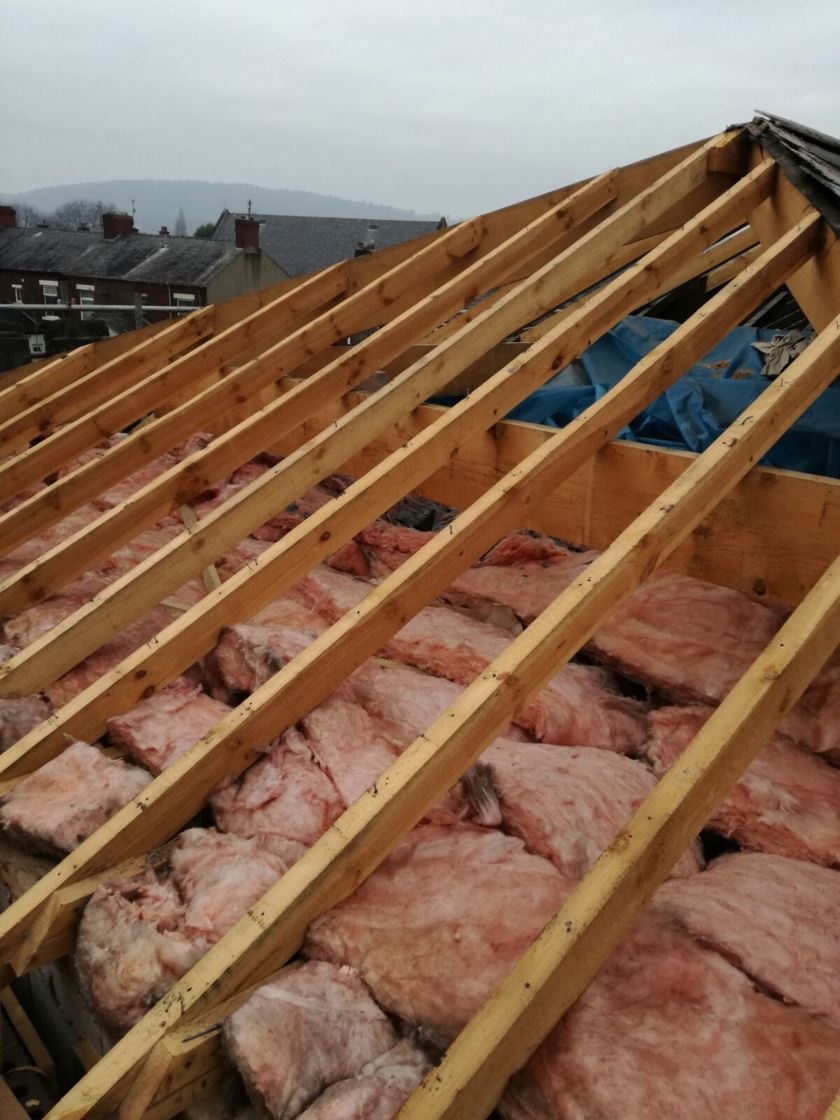 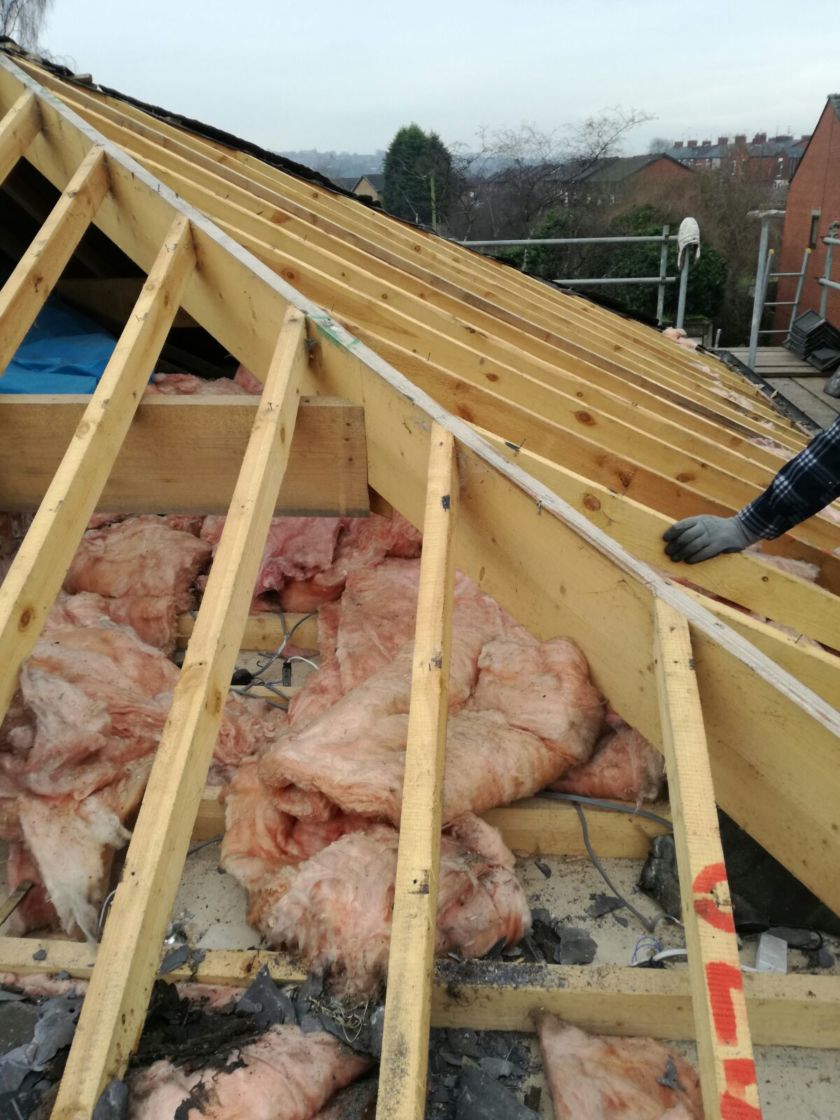 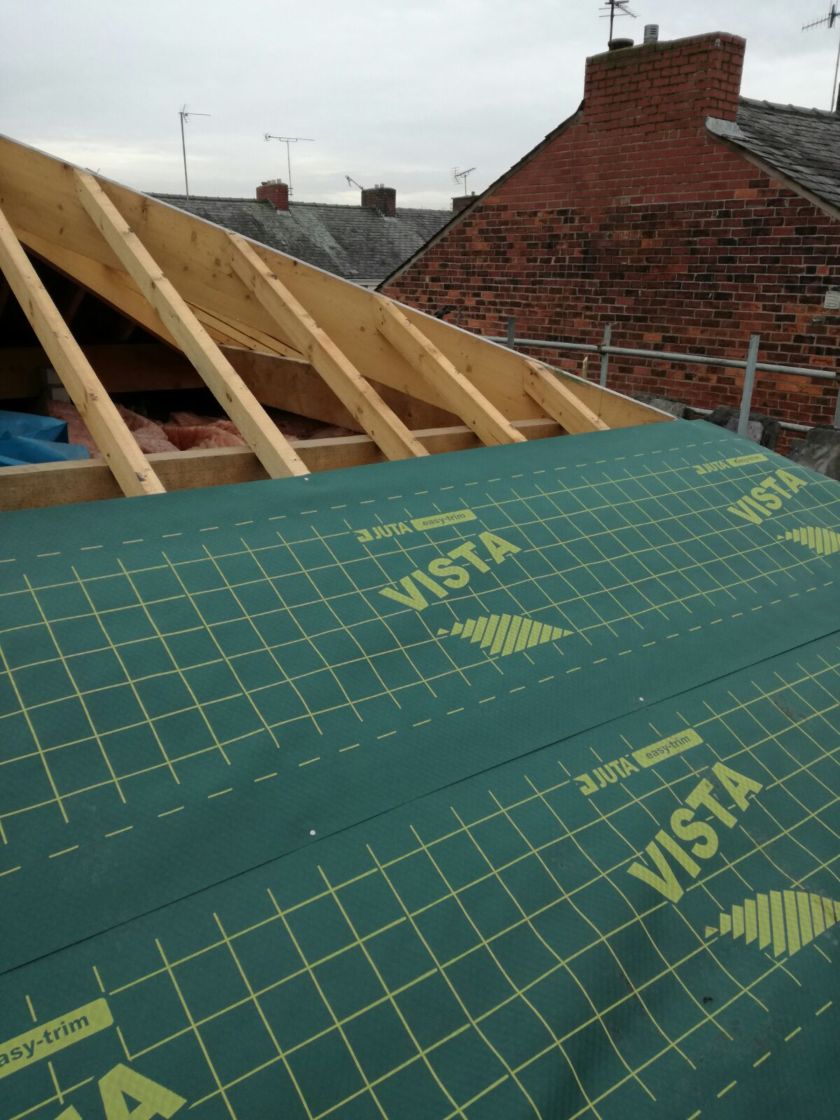 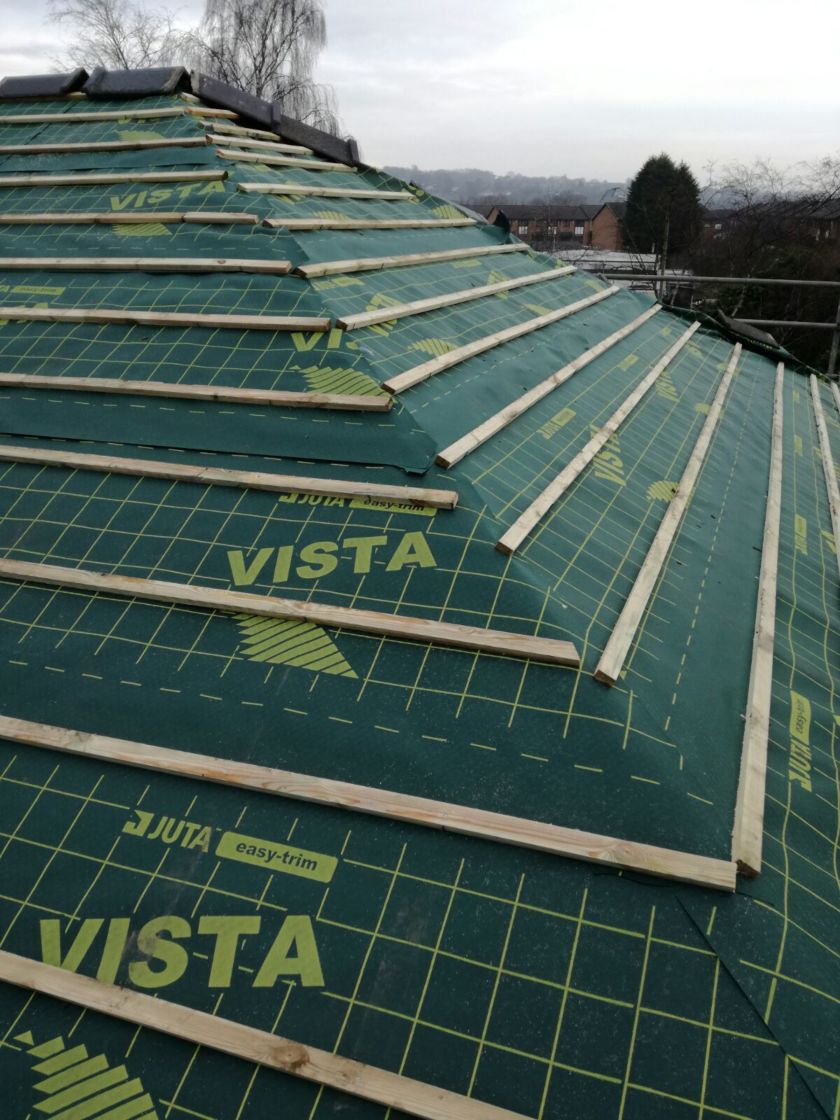 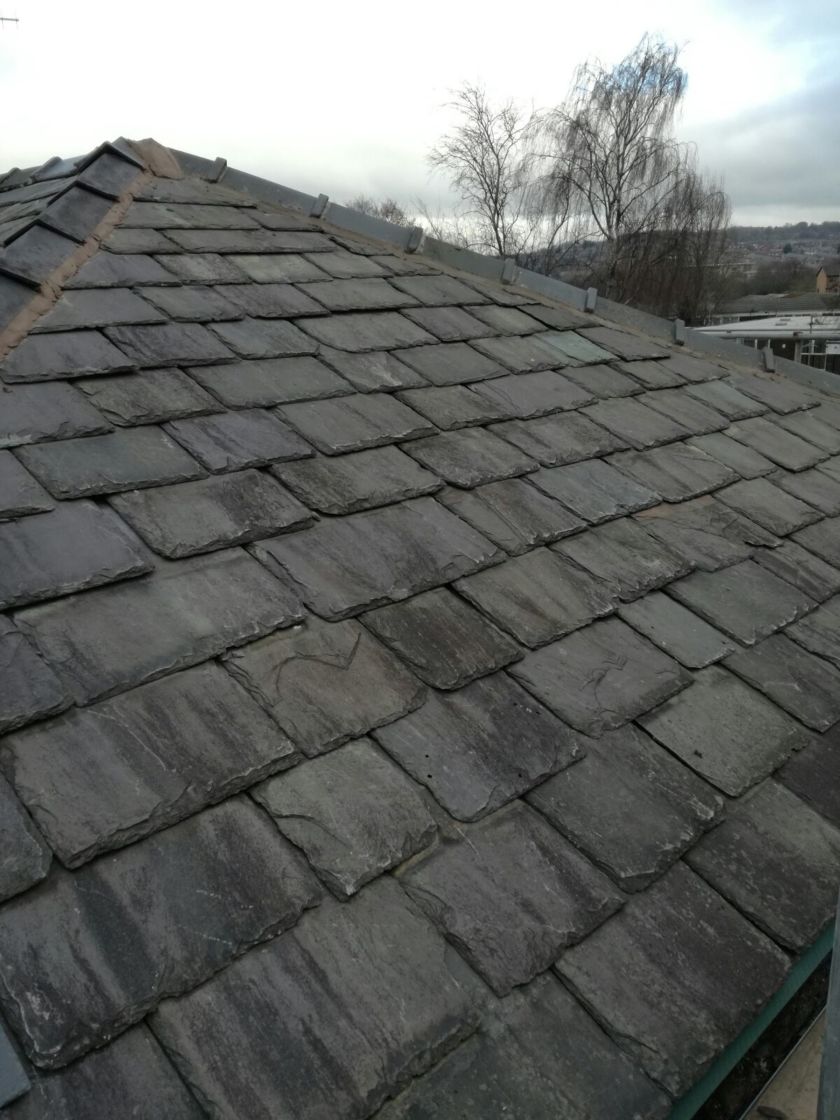 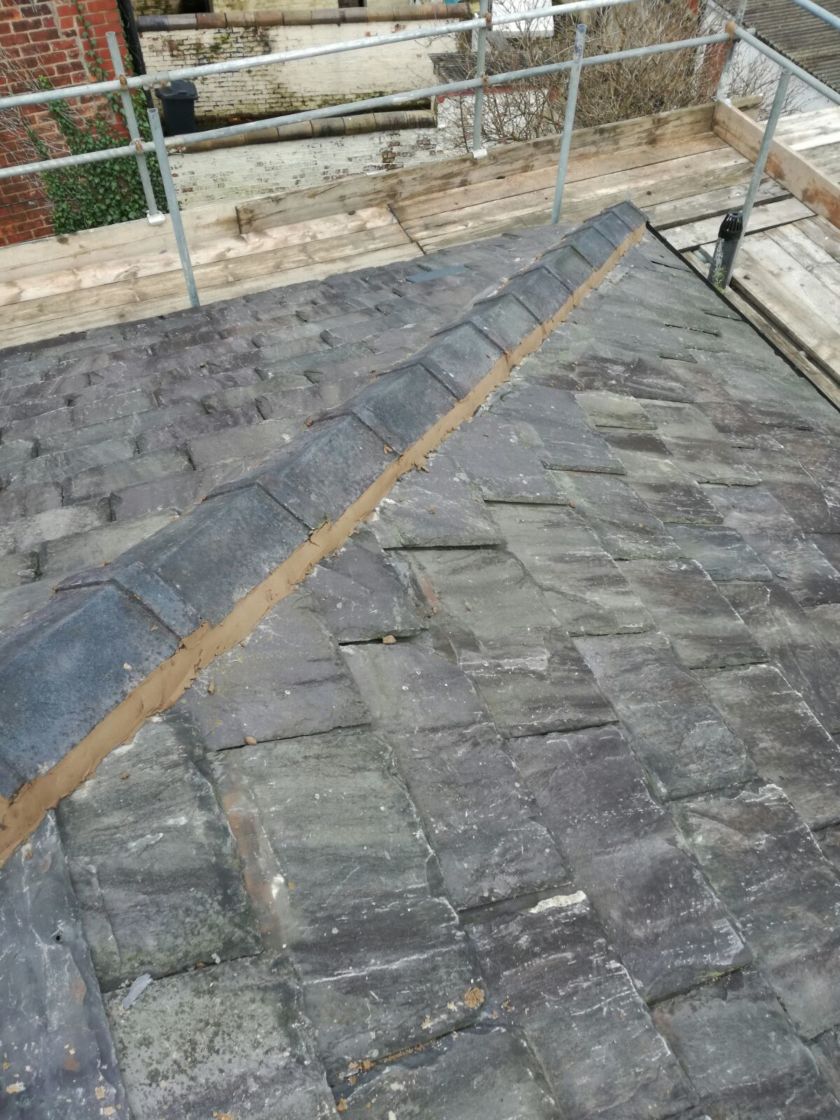 Cause Damage.
The damage was NOT a result of age or deuteriation and was clearly recent.
The basis for the conclusion was determined from the lack of corrosion and fractures to the mortar remaining on the roof line where the ridge tiles had been dislodged chunks of mortar had come away and could be seen still attached to the ridge tiles found.
The punctured roofing felt was clearly new damage as no water ingress was present the felt showed no signs of weathering.
The original roof installation appears to have be correctly installed onto new Battons none of which showed signs of weathering or water ingress. Confirming that the damage sustained to this property was very recent.
Should the issue not be Resolved in a timly fashion
Should the property remain in this state; Just a small amount of gusting winds would be likely to up lift more of the roofing slates, which in-turn will cause the whole roof to suffer a very significant rise in the damage already visible. Should the area be hit more sustained and prolonged strong winds it would be entirely possible to see most if not the whole roof lifted, causing significant damage to the property and that of neighbouring property, vehicles, garden furniture etc. Should rain occur during or after any winds this would cause further internal damage through water ingress in the un-protected areas. Roofing/loft insulation would become sodden, holding excessive levels of water that result in an increase in the load weight resting on joists and the plastered ceilings.  This if left unaddressed will see eventual weakening with the potential to at worst bring down ceilings below, at best cause damp and mould growth the ongoing implications if left un resolved would extend beyond the ceiling to room below.
Adverse wet weather will cause damp and any dripping water though minor can over time cause areas of damp, rot and decay, the growth of mould and moss will add to any issues.
The long-term effects are far wider reaching should the roof remain in this condition.
Our recommendation:
To prevent further issues providing a solution would be to patch repair the torn roofing felt, reinstate the roofing slates with replacement slates where dislodge and damage has occurred, replace and re-bed the ridge hip tiles to form a traditional barrier against the elements this will ensure the full free flow of rainwater removing the potential of damaging Property further.
Web design by Brick technology Ltd.